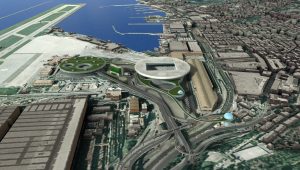 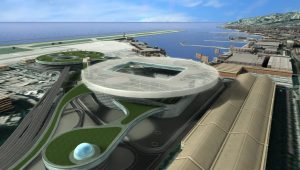 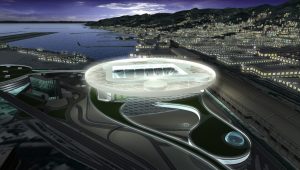 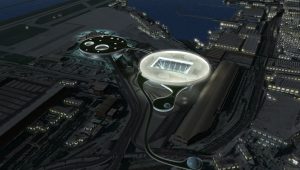 The novelty of the stadium lies in the rich articulation of its three different levels, all of which are inhabitable: the level of the football field, the differentiated stand seat levels and the large suspended and inhabitable cover that is able to host approximately 5000m2 of services and commerce accessible to the public even in the absence of a football match or other event. At the same time the outer part of the stadium is also able to take advantage of this multileveled articulation through a series of elevated pedestrian walkways that will connect the stadium with the new train station, the Erzelli funicular and the airport and the shopping center’s large green rooftop park.

The project for the New Stadium for Genoa is located in Sestri Ponente within a context of great transformative potential. The prospect of the new tourist port, the existence of the technological hub of the IIT at Erzelli and the renovation of the area of the Riva steel mill, make it easy to imagine a context of dynamic development within which the construction of the new stadium represents an element of articulation and intensification.

The necessary strengthening of the infrastructural system and the realization of pedestrian connections correlated with the sports ground, can be understood as a resource that is of utmost necessity for the organization of the future interventions, while the existing structures, such as the airport, are recognized as important assets for the valorization of new urban relations for this area of the city. The favorable position of the site within the metropolitan context along with the forecast transformations, concur to the expectation that the realization of the New Stadium in Genoa promises to constitute a novel and strong element of urban centrality for Genoa.