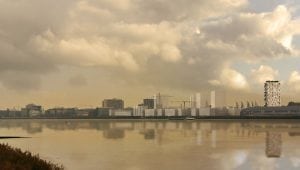 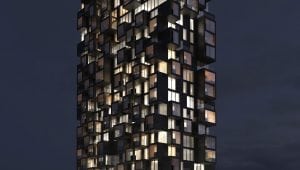 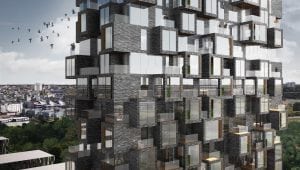 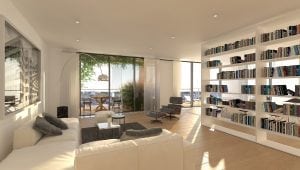 An urban tower is not a skyscraper nor a tall building. An urban tower has a rational structure, a body that engages in a dialogue with both the sky and the ground, and it is in this act of interconnecting these two fundamentally different spheres that its identity and origin lay. Our proposal for this residential tower introduces the concept of variation, acting both on the skin and the shape of the building. It does not strive to be a unique and isolated element, but the catalyst in a series of alterations of the urban tissue. It finds a balance between the formal rigor of a rectangular plan and the heterogeneity of a porous body, between the rigidity of planar surfaces and the alterations introduced by the pixelated extrusions.
In our urban tower, the inner space tries to constantly expand towards the outside. A series of balconies and loggias attempts to generate a certain surplus space for itself while, at the same time, blurring the border between interior and exterior. On a larger scale, the tower establishes a relation with the river and the Antwerp landscape beyond. A contemporary shape, reaching out to the sky of the local urban landscape by exploring the construction material and tectonic possibilities. It is a symbiotic merging of material, constructive traditions and contemporary living standards. A sober, sophisticated tower that enriches and respects the urban context that will be growing around it.